If you are looking for Lebanese food in Singapore, then the best place to find it is in and around Arab Street. My craving for this cuisine led me to Beirut Grill, a restaurant serving authentic Lebanese and Middle Eastern cuisine. This small restaurant is designed with Arabian motifs and artifacts making it quite a colorful setting. It has both indoor and alfresco seating, which helps if you want to embrace the vibes of the nightlife of the bustling Bussorah street, especially on a Friday evening.

The Orders
I enjoy Lebanese cuisine because it usually has a lot of vegetarian options. The dishes usually have vegetables, fruits and whole grains. If you go as a larger group of people, then Beirut Grill is famous for its mezze platter, either hot or cold. But since we were just the two of us, we ordered the individual dishes.

We went with the staple order of soup to start the meal. In the Middle East, ‘Lentil Soup’ is a common dish. This soup was made with the same lentils as Indian dal, but with a texture resembling a classic soup. It was made thick and creamy and garnished with freshly squeezed lemon juice and parsley. This was a delicious soup and acted as a good start to the meal.

A must order side dish is the Batata Harra which is a delicious Lebanese appetizer made with potatoes and cilantro. The sautéed potatoes had such a nice spice kick to them with the chilli and fried onions. They disappeared from the plate in no time. Recommended dish. 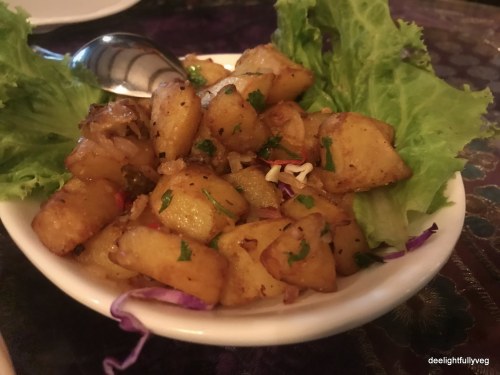 Falafel wraps are addictive because there is hardly anything in them not to like. Beirut Grill’s version had fried falafel, lettuce and tomatoes wrapped in a roll and finished with a spread of hummus and tahini. The falafels made from fava beans and chickpeas were crisp, had an authentic taste and were pretty awesome. The wrap is served with pickles and fries on the side. The portion size is quite good and is apt for the appetite during lunch or dinner time. Highly recommended.

Sometimes they also have an ongoing special menu which also has a decent number of vegetarian items. You’ll also get to catch a glimpse of some belly dancing during your dining experience in the evenings. For its tasty dishes, for an authentic Middle Eastern cuisine fix and for its friendly service, Beirut Grill is worth visiting.