In Tamil, Suvai means to taste the flavours. When Singapore showcases an Indian gourmet festival, I knew I had to taste Indian cuisine in all its glory. Suvai 2015 is an ongoing festival running until August 2nd 2015 and it is located just outside Bugis MRT on Tan Quee Lan Street. Shielded from the rains, it is a tent like structure with ample seating and good hygiene standards. The various spices used in Indian cooking were displayed in a very attractive manner. There is also a live telecast for the attempt at ‘Guinness Book of World Records for the World’s Largest Curry’ which was extremely interesting to watch. At the time of writing this review, I do not know if the record has been made, hence I am keeping my fingers crossed 🙂

The Orders
Chefs from various culinary backgrounds have set up their stalls. Each stall showcases three unique dishes. For vegetarians, there are dessert options in all stalls and main course options in some stalls. Let me update you on the interesting things I tried.

Chef Jonathan Lee, Head Chef at Artichoke
This was the best stall offering 2 veg dishes. First, we tried ‘Aloo Gobi Sabich’ which was fried cauliflower, potato hummus and herbs filled in pita pockets. The cauliflower was fried to perfection and along with coriander garnish, this dish was extremely tasty. 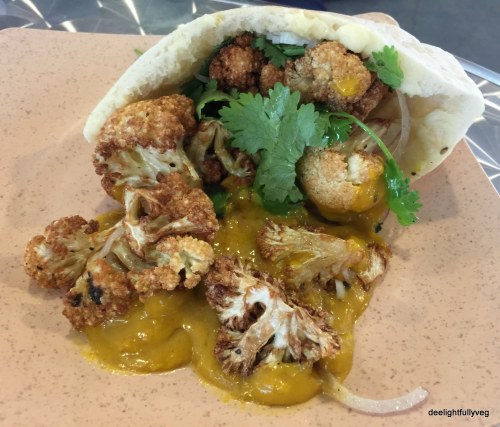 The chef had created ‘Masala Tea Slushie’ as one of his signature dishes. Everything about this drink was unique. Freshly brewed tea with a seven spice blend from Sri Lanka formed the frozen slushie base. It was topped with coconut ice cream and the entire combination worked like magic. The cinnamon notes from the tea hit perfectly and I would highly recommend this.

Chef Vik
The next stall we tried and liked showcased dishes by Chef Vik. Our first order was ‘Potato and Paneer Croquettes’ which consisted of deep-fried crispy croquettes served with minty spinach puree. The dish was presented very aesthetically with fine bean sprouts and almond shavings which enhanced the taste. The size of croquettes were slightly smaller in size compared to our expectation.

Potato and paneer croquettes at $5

We tried the dessert which was ‘Paayasam Panna Cotta’ which had paayasam infused panna cotta topped with frozen meringue and fresh berries. The instant freeze using liquid nitrogen added to the visual effect of this dessert and they nailed the texture of the pannna cotta.

Chef Devagi Sanmugham
When it comes to Indian starters, chaat is an eternal favourite. We tried a variant in this called ‘The Explosion’ which had potatoes with chaat masala, mint and tamarind chutney and pomegranates served in a crispy shell shaped like a small shot glass.

As a dessert, ‘The Saffron Puffs’ had a combination of different flavours like pistachio, gula melaka and coffee in the sauce. The crispy donuts were infused with saffron. 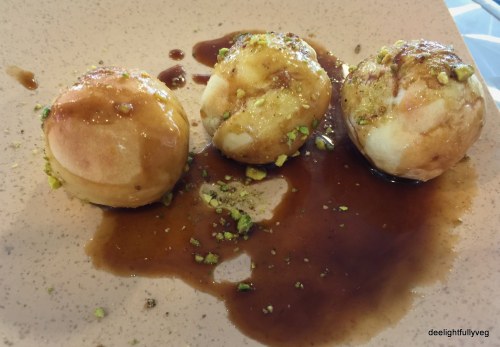 Chef Thanyadar Suteedechanon
At this stall, we tried ‘Garam Masala Tom Yum Rice’ which had the Thai ingredients like galangal and lemongrass in balance. For the vegetarian version, we asked for no prawns. I wanted the rice to be warmed better – the dish was served at room temperature.

There are also ongoing live music bands and masterchef classes happening here. The festival will end on 2nd Aug at 10 pm. Check their website for timings. For unique Indian offerings, for an efficiently managed food festival, the different tastes at Suvai 2015 beckon you at the earliest! Head there this weekend for a gastronomical delight!