Poha is a very popular breakfast or tea-time dish in India. Due to the diversity in Indian cuisine, there are different variants of poha. Poha is basically a flattened rice flake and is available in different grades of thickness. Having grown up in Maharashtra, I have had the ‘Kande Pohe’ (uses medium poha) which is pretty awesome. This time I tried the ‘Indori Poha’ from the state of Madhya Pradesh in India. So, the first difference I noticed in the preparation method is that for this dish, I had to use thick poha. The second difference is in the ingredients used as the garnish. The presence of fennel seeds and a hint of sweetness in the form of sugar and pomegranate seeds are the prime differences in the two styles of poha. When you add all the flavorful components in this colorful dish, I can assure you that you won’t stop eating it. This dish is also perfect for a teatime party as poha with chai is a divine combination. For those staying in Singapore, I picked the nylon sev from Mustafa and thick poha from Sri Murugan stores.
Recipe Details :
Serves: 3 pax
Time: 20 mins
Difficulty: Easy
Ingredients : 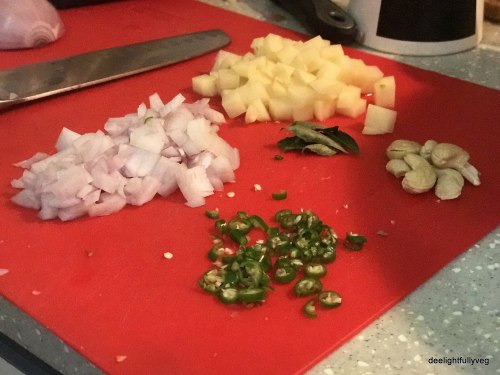 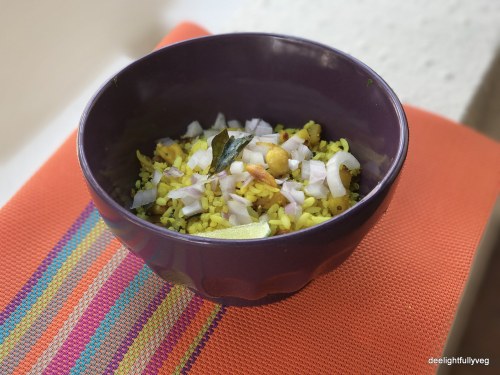 It’s quite evident from the name bitter gourd (karela), that not many people would be a fan of this vegetable. Apart from the health benefits, if made well, it can be transformed into amazing snacks. When they take the form of crispy fries, the humble bitter gourd can become a delicacy. The mild bitterness blends well with the spices and makes it a good tea time snack or side dish along with dals, sambhar and rasam.
Recipe Details :
Serves: 3-4 pax
Time: 20 mins
Difficulty: Easy
Ingredients : 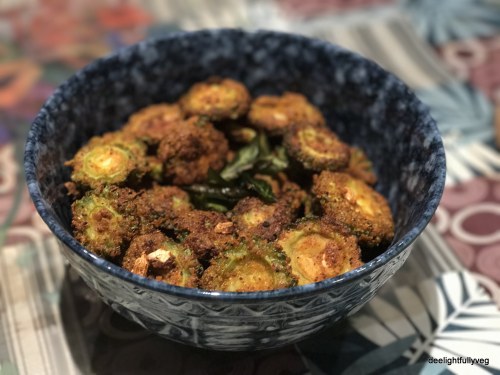 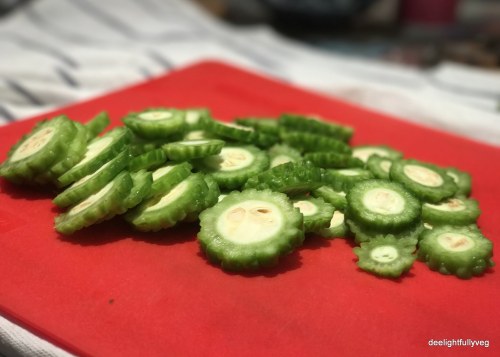 Mixing the bitter gourd and spices

Navratri is one of the holiest Hindu festivals where people across India worship the different avatars of Goddess Durga for nine days. Back home, I used to look forward to the Garba and Dandiya nights where my friends and I would dress in traditional attire and dance the night away. This dance originates from the state of Gujarat in India. The dhokla is a delicious food item made in Gujarat and is a popular and healthy snack. Residing in the red dot country, I decided to post a celebratory recipe in the form of Beetroot Dhokla which gets a beautiful shade of natural red colour from the beet. They are very easy and quick to make and are an instant hit with kids and adults. 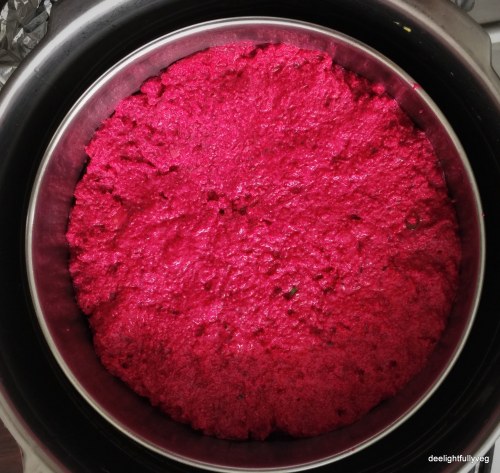 I was surfing the web and saw that most of the food-related updates were connected to the Superbowl. Finger foods, bar bites, burgers and beers comprised most of my news feed. To add to that, I was missing vada pav from back home. This dish was a result of all such thoughts. I decided to use sweet potato as the primary ingredient. Most vegetarian burgers contain mushrooms – but I’m not a big fan of them. To add some body to the burger, I used chickpeas. This combination worked great together and the patty had layers of flavour and texture. When slathered with some tahini yogurt dip topped with thinly sliced onions, it was a perfect bite. It is not very oily and the patty has loads of texture on its own. We paired it with wholemeal buns – but they are good enough to eat on their own. For those who are vegans, you can just skip the yogurt spread. I would love to hear how it turned out in case you try it 🙂 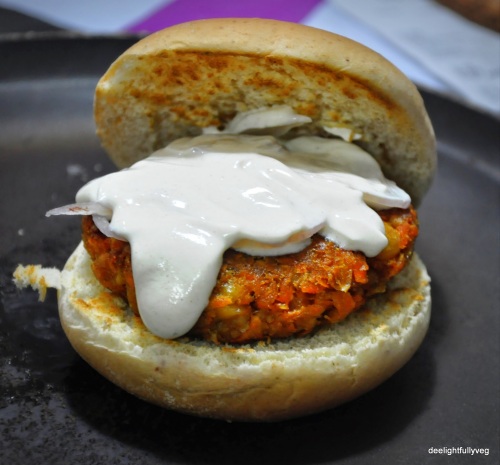 To make the patty:

Whenever I feel like having a burger, I create fritters (or tikkis) and pair it with bread or buns. This time, I wanted to try something new. I had never tried cooking with purple cabbage. When I found some fresh cabbage and picked it up, I had no clue what I was going to end up making with it. I definitely knew it could be grated and since it looked crunchy, I knew it would be a nice ingredient for a tikki. Potato is an eternal ingredient that is invariably used in any tikki recipe. The combination of these two vegetables turned out to be delicious and with the addition of some spices, the flavour turned out to be irresistible. It is great for tea time snacks and the colour that the cabbage imparts to the dish makes it very visually appealing. The tikkis disappeared in no time and I will definitely say that you’ve got to try making them! 🙂

On rainy weekends, fritters (bhajjis, pakoras – call them what you want!) make an ideal pairing for evening tea. I wanted something crunchy, but also something quick. As you would have read, I avoid deep frying and prefer to eat healthy. I have made dips using dill leaves before and know that dill has an strong inherent flavour. If overused, it can overwhelm the dish. To use an analogy, its almost like what fennel imparts to a broth. While frying, the aroma was strong, but the crispiness that the fritters had was mind-blowing. Pakodas is an Indian term used to describe such type of fritters. I never knew that dill would taste so good when combined with chickpea flour and other spices. I opted to shallow fry in a small pan and after frying, I used an absorbent paper to remove any oil that was left. The golden brown colours of the pakoda combined with the delicious taste will leave you wanting for more 🙂 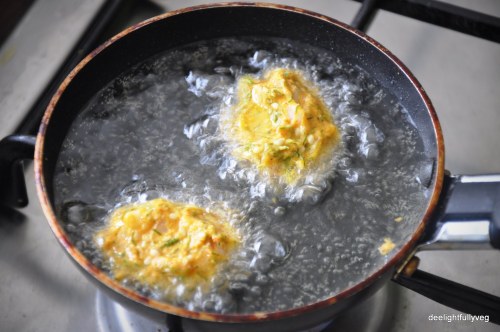